To start on a smaller note, guess who found an undocumented gallop today?? That’s right! THIS GIRL. The new grad!

Yesterday, I was listening to my patient (6 month old, ASD/VSD unrepaired, PFO unrepaired, pulm HTN, etc). She had a murmur, as expected. But I was hearing a third sound. Now, I had never heard a gallop in my life. I know what it is, I know the pathophys of it, I know what causes it, and potentially what it sounds like. But I have never had a patient (adult of child) that had one. But when I was listening to her heart, I knew that it was not a crisp lub-dub. It was like duh-lub dub duh-lub-dub lub-dub duh-lub-dub lub-dub. It was on and off. Being an orientee, I still don’t trust my judgement in assessments that I’m not familiar with. So I got my preceptor and asked for her opinion. She told me after listening to the patient that she can kid of hear it, too. Now, I don’t know if you’ve listened to a 6 month old’s heart sounds before, but they’re heart rate ranges from 120-160. This child’s HR was fast. Like hummingbird fast. Try tapping your hand 2-3 times a second. That makes a heart rate of about 150-160. Being that fast, it’s hard to hear everything. So this baby was not only crying and kicking and not cooperating with me, but also had coarse to clear lung sounds,a  murmur, and now potentially a gallop. So my preceptor (who’s been there 11 years, btw) was also not confident. I talked to the fellow and she just brushed it off and said she didn’t hear anything. So I let it go. I was convinced it was still there, though. I continued to document that I could hear it, because yes, I would bet my license that there was a gallop. Today during rounds, she had mentioned that maybe, she was sort of hearing something. But also not confident because it’s very hard to hear. So our attending took a listen, and eventually said, “Yup, that’s a gallop. She’s had it all week. Sounds like S4 to me.” HELLS YEAH. I was riiiiight! The fellow just looked at me and said, “Good ear!”

Secondly, I took care of hands down the cutest baby I have ever taken care off. This baby was just charming and smiling and flirting. Well, now he is because he’s feeling so much better (3 month old, bacterial meningitis). The parents were young and were getting so overwhelmed. I had later found out that the baby’s grandfather (dad’s dad) passed away last Monday, and the baby was admitted on Thursday. Today, they got a call saying that the mom’s sister-in-law was flown to Shock Trauma for a ruptured aneurysm. Mom ran out of the room to the other wing of the hospital to visit. I was left with dad. I could tell that dad was on the verge of losing it. Pacing, sitting, then standing… He just didn’t know what to do with himself. He offered if I wanted him to change his son’s diaper, and I told him to just sit down and take a break. He eventually let it out. He talked about the aneurysm, and eventually his dad. He could barely get the words out. Grandma (mom’s mom) had mentioned earlier that he’s not a talker when it comes to tough stuff, as we saw the night before when he just kept pacing when his son lost his IV and we had to stick him three times. When he was talking about these things and just got quiet. And I could tell that he just wanted to be left alone. SO I went on with my cares for 4pm. The baby woke up and looked at me and smiled and giggled for the first time today. And I said, “Oh my goodness, is that a smile??” And dad sprinted up and came to his side and just lost it. Got teary eyed and was laughing and chuckling and kept saying, “Oh buddy, you’re making dad feel so much better.” That thirst and longing to see his son’s smile was so raw. It was like he was desperate to see something good and beautiful again, despite everything that has been happening. They are going through so much, more than most people go through in a lifetime. And the one thing that can make them feel better is their son’s smile. How freaking amazing is that? This is what we celebrate in the PICU. Patients smiling. Patients laughing. We suffer great losses and it lowers morale for a few days. But these little wins, they do so much not only for the patient or their families, but also the staff.

Thirdly, we discharged a patient who’s been there since she was born. Yes, she went home with a pacemaker because of congenital heart defects (2 month old, Tet repair), but she is healthy now. The parents are also amazing. Dad wrote us a card. 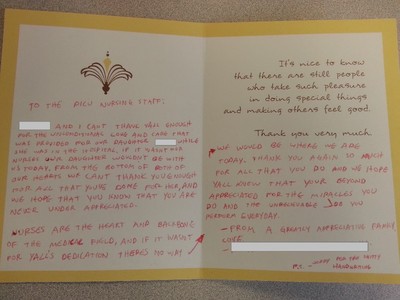 Working with children has also made me realize something. I now have a more appreciation of parents. And this is an overwhelming understatement. Kids are amazing, we all know that. They are resilient, strong, faithful, and are so willing to fight. I have always wanted to be a mom, but now, I’m having second thoughts because of my experiences as a nurse. Not because I’m scared, but there is that. I will be more paranoid that most moms now that I know so many things can go wrong. Every cough, every sniffle, every insect bite will be blown way out of proportion. But it’s not only the medical burden. It’s also the emotional burden that scares me. I get it that being a parent will mean that every decision you make from that point on will mean that you are not the priority anymore. Every choice will be a sacrifice. Because you will cease to matter. I get that, I understand that responsibility. What scares me is the hold these kids have on their parents, how much power they have. Every cry of pain breaks every mother’s heart. The hardest part of my job is not the actual act of doing a painful task to a child. It’s having to hear the parents sob quietly in a corner, or see them look at their child helplessly, as their kid looks as them with an expression of betrayal, as if saying, “Why are you letting them do this to me? You’re supposed to be protecting me!” It already breaks my heart to look at a 3 month old with a fever and can’t get any more medications, and he’s just feeling so crummy. I feel incredibly helpless and I hate not being able to do anything. And this is coming from a stranger taking care of a baby for a few days who I will probably never see ever again! It’ll be even worse if it were my own child. I would be a mess. And this is just when they’re an infant. What will I do when someday, my teenage daughter comes home heartbroken and in tears because her boyfriend cheated on her?? I can’t even imagine the feeling of the parents I have worked with who have lost their child to many different illnesses.

It’s just amazing to realize the unconditional love parents have for children. I get a glimpse of that every now and then at work, and sometimes for my siblings. When they’re in pain, it’s almost as if I’m in pain. (Another story for another day.) As I’m growing up, I’m starting to appreciate my parents and how overprotective and sometimes overbearing they were when I was younger. And until now. Our parents literally loved us into existence. Just let that sink in… It’s because they really can’t help it. They feel tied to us. We literally were, at some point, a part of them. And that never really goes away.

It’s so easy to forget how selfless and unbelievably strong our parents are. And it’s even easier to not show appreciation for them. But these past few weeks have showed me mere glimpses of the joys and horrors of being a parent. And all I can say is that these parents are freaking superheroes.

So many things I’m learning about myself and about life in this job. I wouldn’t have it any other way.